Satellite images from the BRITE mission with the participation of researchers from TU Graz and the Universities of Innsbruck and Vienna document for the first time the complete development of a nova – from eruption to maximum brightness and burn out. The publication has now appeared in the journal Nature Astronomy. 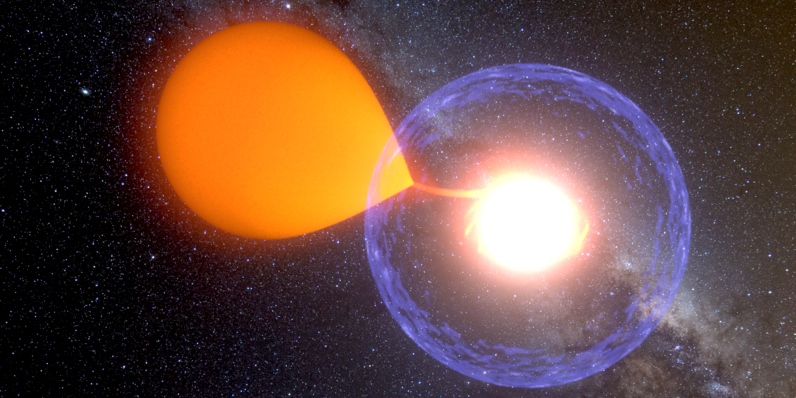 The first two Austrian satellites in space were involved in a premiere: the observation of a nova eruption, as artistically depicted here. © Nova_by K. Ulaczyk, Warschau Universität Observatorium

Since the beginning of the BRITE Constellation in 2013 – a mission in which the first two Austrian satellites were involved – the five nanosatellites have taken millions of images. However, the recordings of a complete nova eruption are unique worldwide.

During a nova eruption, a white dwarf sucks matter from its companion star and stores this mass on its surface until the gas pressure becomes extremely high. An explosion occurs in which hydrogen is burned, creating enormous shock fronts. These shocks are much stronger than, for example, those generated by supersonic aircraft in our Earth's atmosphere. Instead of sound, therefore, an enormous burst of light and high-energy radiation is produced, such as gamma and X-ray radiation. This means that stars that could previously only be observed with telescopes can suddenly be seen with the naked eye.

"But what causes a previously unimpressive star to explode? This was a problem that has not been solved satisfactorily until now," says Prof. Werner Weiss from the Department of Astrophysics at the University of Vienna. An explosion of Nova V906 in the constellation Carina (Latin for keel of a ship) has now provided answers and confirmed this explanatory concept, long after the explosion took place locally. "After all, this nova is so far away from us that its light takes about 13,000 years to reach the earth," explains Weiss. The event could be documented by the BRITE Constellation between March and July 2018.

This first-time ever observation of a complete nova eruption came about by chance. The BRITE Constellation had just photometrically observed 18 stars in the constellation Carina continuously over several weeks when the nova suddenly appeared in the field of view. Rainer Kuschnig, Operations Manager of the BRITE Constellation at TU Graz, discovered the eruption during his daily inspection of the five nanosatellites. "Suddenly there was a star on our records that wasn't there the day before. I'd never seen anything like it in all the years of the mission!"

A short search among the top news in the night sky showed that the new star was identified as Nova Carinae 2018. Rainer Kuschnig informed the 12-member leadership of the BRITE Constellation's scientific team, the BRITE Science Team. "It is fantastic that for the first time a nova could be observed by our satellites even before its actual eruption and until many weeks later," says Otto Koudelka, project manager of the BRITE Austria (TUGSAT-1) satellite at TU Graz.

"This fortunate circumstance was decisive in ensuring that the nova event could be recorded with unprecedented precision," explains Konstanze Zwintz, head of the BRITE Science Team, from the Institute for Astro- and Particle Physics at the University of Innsbruck. Zwintz immediately realised "that we had access to observation material that was unique worldwide." The cooperation of BRITE Constellation with Elias Aydi from Michigan State University, USA, led to the publication now published in Nature Astronomy with the title "Direct evidence for shock-powered optical emission in a nova".

The BRITE Constellation is an ensemble of small satellites that record the light of selected stars in the sky by high-precision photometry. From an altitude of about 800 km, the BRITE Constellation observes stars with magnitudes between 0 and 6 in optical light, with the faintest stars just barely visible to the naked eye under excellent observation conditions. Typically, 15 to 20 stars are measured continuously for about half a year in a 24 square degree field – an area as large as, for example, the entire constellation of Orion or the Plough (Big Dipper).