Magnetic effect without a magnet

Surprise in solid-state physics: The Hall effect, which normally requires magnetic fields, can also be generated in a completely different way – with extreme strength. 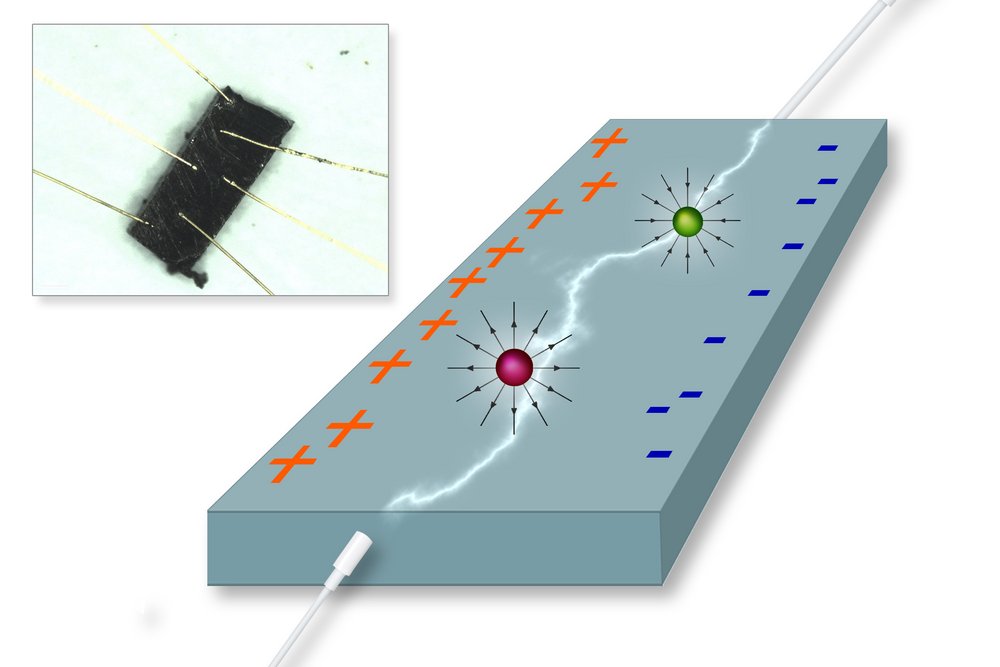 The material behaves as if magnetic monopoles were present 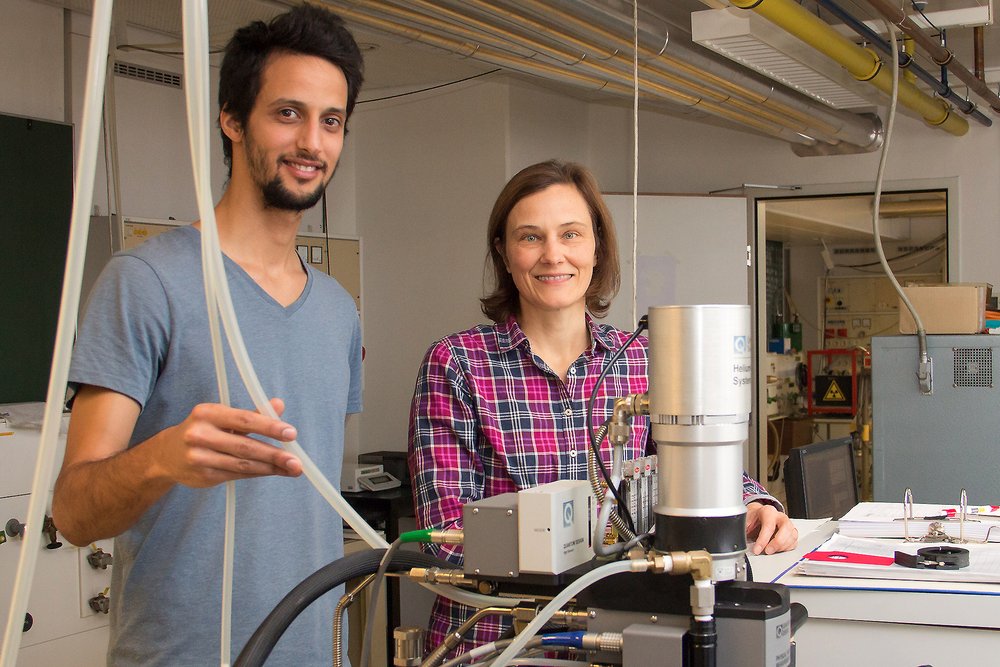 Sami Dzsaber and Silke Bühler-Paschen in the lab at TU Wien.

Electric current is deflected by a magnetic field – in conducting materials this leads to the so-called Hall effect. This effect is often used to measure magnetic fields. A surprising discovery has now been made at TU Wien, in collaboration with scientists from the Paul Scherrer Institute (Switzerland), McMater University (Canada), and Rice University (USA): an exotic metal made of cerium, bismuth and palladium was examined and a giant Hall effect was found to be produced by the material, in the total absence of any magnetic field. The reason for this unexpected result lies in the unusual properties of the electrons: They behave as if magnetic monopoles were present in the material. These discoveries have now been published in the scientific magazine PNAS.

A voltage perpendicular to the current

When an electric current flows through a metal strip, electrons move from one side to the other. If a magnet is placed next to this strip, a force acts on the electrons - the so-called Lorentz force. The path of the electrons through the metal strip is no longer straight, it is bent a little. Therefore, there are now more electrons on one side of the metal strip than on the other, and this creates a voltage – perpendicular to the direction in which the current flows. This is the classic Hall effect, as it has been known for many years.

"Measuring the strength of the Hall effect is one of the ways we characterise materials in our laboratory," says Prof. Silke Bühler-Paschen from the Institute of Solid State Physics at TU Wien. "You can learn a lot about the behaviour of electrons in the solid state from such an experiment." When Sami Dzsaber, who was working on his dissertation in Bühler-Paschen's research group, examined the material Ce3Bi4Pd3, he took his task very seriously and also carried out a measurement without a magnetic field. "Actually, this is an unusual idea - but in this case it was the decisive step", says Silke Bühler-Paschen.

Investigations were therefore carried out at the Paul Scherrer Institute in Switzerland: With the help of muons - elementary particles that are particularly well suited for investigating magnetic phenomena - the material was examined more closely. But it turned out that no magnetic field could be detected even on a microscopic scale. "If there is no magnetic field, then there is also no Lorentz force that can act on the electrons in the material – but nevertheless a Hall effect was measured. That is really remarkable," says Silke Bühler-Paschen.

Symmetry is what counts

The explanation for this strange phenomenon lies in the complicated interaction of the electrons. "The atoms of this material are arranged according to very specific symmetries, and these symmetries determine the so-called dispersion relation - that is the relationship between the energy of the electrons and their momentum. The dispersion relation tells us how fast an electron can move when it has a certain energy," says Bühler-Paschen. "It's also important to note that you can't look at the electrons individually here - there are strong quantum mechanical interactions between them."

This complex interaction results in phenomena that mathematically look as if there are magnetic monopoles in the material – i.e. solitary north and south poles, which do not exist in this form in nature. "But it actually has the effect of a very strong magnetic field on the movement of the electrons," says Bühler-Paschen.

The effect had already been predicted theoretically for simpler materials, but no one had been able to prove it. The breakthrough came with the investigation of a new class of materials: "Our material with the chemical composition Ce3Bi4Pd3 is characterised by a particularly strong interaction between the electrons," explains Bühler-Paschen. "This is known as the Kondo effect. It causes these fictitious magnetic monopoles to have exactly the right energy to influence the conduction electrons in the material extremely strongly. This is the reason why the effect is more than a thousand times larger than theoretically predicted."

The new giant spontaneous Hall effect holds some potential for next-generation quantum technologies. In this field, for example, non-reciprocal elements that produce direction-dependent scattering entirely without an external magnetic field are of importance; they could be realized with this effect. "The extremely non-linear behaviour of the material is also of great interest," says Silke Bühler-Paschen. "The fact that complex many-particle phenomena in solids give rise to unexpected application possibilities makes this field of research particularly exciting."