How a rejection gave rise to a career

Aged 18, Anita Emmerstorfer-Augustin had to say goodbye to her original career aspiration – and then found her vocation in biotechnology. 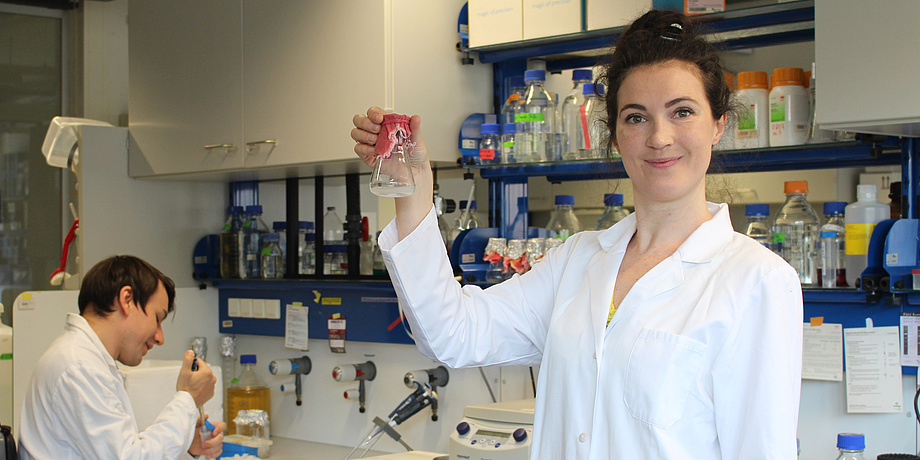 "I was extremely frustrated back then," says Anita, as she sits at home in her study casually dressed in her hoody and recalling the time before her university studies, and the rejection she got when she applied to train as a physiotherapist when she was 18. "As a child I dreamed of being a physiotherapist. In my youth I danced in a ballet ensemble when I hurt my shoulder. I had a really nice physiotherapist who really inspired me." But in every failure there's an opportunity, and so Anita sought out a new career. And the now 33-year-old found it in her second great passion: nature. "Natural processes have always interested me even though the focus in my school was on languages." So, a colourful mixture of interests led to an even more colourful choice of study programme: technical chemistry at Graz University of Technology. The young researcher soon developed an interest in biotechnology. She decided to pursue this field of study in her master's degree course and worked for the first time on internal cell membranes in her doctoral thesis. "At that time, I was producing plant scents in yeasts. This is of particular interest for the industry because production using yeasts is both cheaper and more environmentally friendly than the extraction of fragrances from plants," she explains.

With an Erwin Schrödinger Fellowship in her pocket, she then moved to the laboratory of the renowned biochemist Jeremy Thorner at the University of California in Berkeley. Thorner's research focuses on lipid sensing in the plasma membrane. Two years later with her newly gained research interest in her rucksack, she returned to TU Graz and applied for the Young Researchers Group at BioTechMed-Graz, among others. This programme supports promising postdocs in establishing their own research group. The topic chosen reads "How membrane lipids cross-talk with the cell wall: a study using sterol-modified Pichia pastoris".

"I love being challenged," says Anita, explaining why she chose the highly demanding topic of cell membranes as her research topic.  "Membranes are very complex," she explains. "Still very little is known about their structure, particularly with regard to their exact lipid compositions." In fact, lipids make up an important component of every membrane.  Due to their special molecular structure, they attach themselves to each other and form a lipid bilayer that separates the inside of a cell from its outside.

One of the most important lipids in cell membranes is the group of sterols. It is not yet known how exactly a cell can check the composition of the sterols in the membranes and monitor their structural integrity. And she adds: "But we do know that cells react extremely sensitively to disturbances in the sterol balance, and that such defects can destroy the cell altogether." For this reason, the researcher has taken a new approach: she produces sterols artificially. "We have further developed a special yeast strain in such a way that it produces human cholesterol instead of ergosterol, the actual yeast sterol". In this way, sterols can now be studied without destroying the cell. This basic research is particularly interesting for the pharmaceutical industry because membranes make good targets for antibiotics. "The more we know about the regulatory processes, the more specifically manufacturers will be able to develop antimicrobial agents."

Anita Emmerstorfer-Augustin's application for the BioTechMed-Graz Young Researchers Group was accepted. Over the next four years, the researcher will be busy establishing her own research laboratory.
As for her future, she dreams of an academic career – yet  another challenge for her. But after all, she likes challenges. "You mustn't worry too much or you'll miss out on the fun," she says, concluding her story with a wink.

This research area is anchored in the Field of Expertise “Human & Biotechnology”, one of five strategic foci of TU Graz.

You can find more research news on Planet research. Monthly updates from the world of science at Graz University of Technology are available via the research newsletter TU Graz research monthly.

BioTechMed-Graz is a research cooperation between TU Graz, the University of Graz, and the Medical University of Graz that is dedicated to research into health at the interface between biomedical foundations, technological developments and medical applications. Since 2011, the network has been implementing a number of successful priority projects in the four specialist areas of molecular biomedicine, neurosciences, pharmaceutical and medical technology and quantitative biomedicine and modelling.