A technology developed at Graz University of Technology uses LED instead of laser sources for the additive manufacturing of metal parts and optimizes 3D metal printing in terms of construction time, metal powder consumption, equipment costs and post-processing effort. 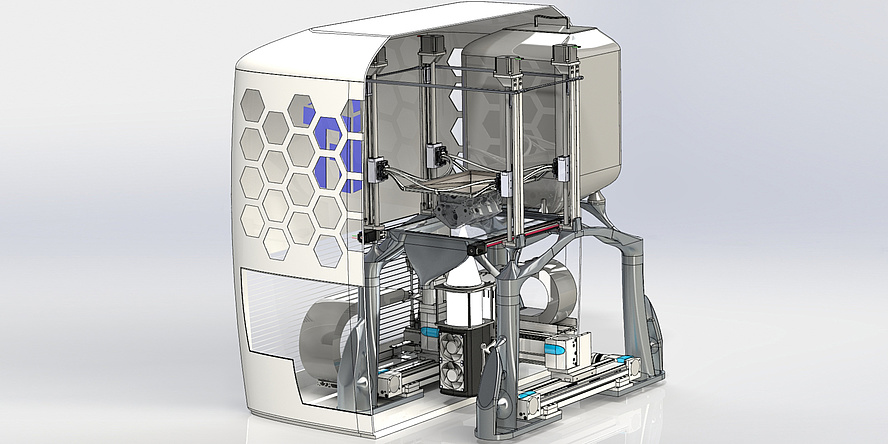 Selective LED-based melting (SLEDM) – i.e. the targeted melting of metal powder using high-power LED light sources – is the name of the new technology that a team led by Franz Haas, head of the Institute of Production Engineering at TU Graz, has developed for 3D metal printing and has now applied for a patent. The technology is similar to selective laser melting (SLM) and electron beam melting (EBM), in which metal powder is melted by means of a laser or electron beam and built up into a component layer by layer. However, SLEDM solves two central problems of these powder bed-based manufacturing processes: the time-consuming production of large-volume metal components and the time-consuming manual post-processing.

Unlike the SLM or EBM processes, the SLEDM process uses a high-power LED beam to melt the metal powder. The light-emitting diodes used for this purpose were specially adapted by the west Styrian lighting specialist Preworks and equipped with a complex lens system by which the diameter of the LED focus can be easily changed between 0.05 and 20 millimetres during the melting process. This enables the melting of larger volumes per unit of time without having to dispense with filigree internal structures, thus reducing the production time of components for fuel cell or medical technology, for example, by a factor of 20 on average.

Tedious reworking is no longer necessary

This technology is combined with a newly designed production plant which – in contrast to other metal melting plants – adds the component from top to bottom. The component is thus exposed, the required amount of powder is reduced to a minimum and the necessary post-processing can be carried out during the printing process. "The time-consuming, usually manual reworking that is necessary with current methods, for example, smoothing rough surfaces and removing supporting structures, is no longer necessary and saves further valuable time," says Haas.

The Institute of Production Engineering and the Institute of Materials Science, Joining and Forming are currently working intensively on the set-up of their own additive manufacturing laboratory, the AddLab@tugraz. In Planet Research, Franz Haas tells more about the project (with video).

Fields of application and further plans

A demonstrator of the SLEDM process is already being considered in the K-Project CAMed of the Medical University of Graz, where the first laboratory for medical 3D printing was opened in October 2019. The process will be used to produce bioresorbable metal implants, i.e. preferably screws made of magnesium alloys that are used for bone fractures. These implants dissolve in the body after the fracture site has grown together. A second operation, which is often very stressful for people, is therefore no longer necessary. Thanks to SLEDM, the production of such implants would be possible directly in the operating theatre, because "an LED light is naturally less dangerous for the operation than a powerful laser source," says Haas.

The second focus is on sustainable mobility, namely the production of components such as bipolar plates for fuel cells or components for battery systems. "We want to make additive manufacturing using SLEDM economically viable for e-mobility and position SLEDM in this field of research at an early stage," says Haas, who will produce a marketable prototype of this 3D metal printer - "made by TU Graz" - in the next development step: a further innovation in the university environment.

The SLEDM process was developed in the FoE "Mobility & Production", one of five scientific research foci of Graz University of Technology.

At Graz University of Technology, various research groups are working on additive manufacturing processes. Information on this topic can be found in our TU Graz research e-paper: The 3D Revolution