Nerve Stimulation with the Help of Implantable Mini Solar Cells

An international research team has successfully developed and tested a concept in which nerves are stimulated with light pulses. The method provides considerable advantages for medicine and opens up a wide range of possible applications. 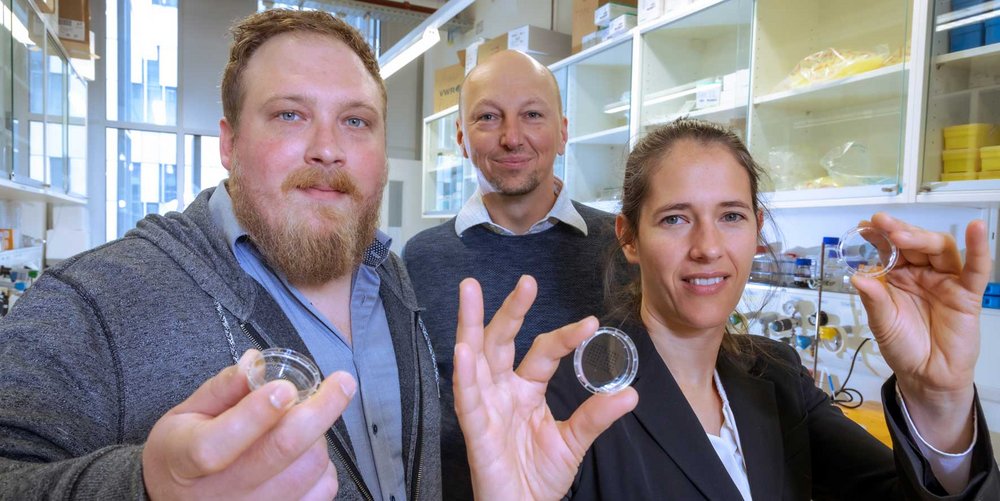 The technology enables completely new types of implants that can be used to stimulate nerve cells and was developed in a joint effort by researchers from Graz University of Technology (TU Graz), the Medical University of Graz (Med Uni Graz), the University of Zagreb and the Czech CEITEC. The basis of this technology involves colour pigments from the food industry, such as those used in organic solar cells. The pigments are vapour-deposited to form a layer only a few nanometres thick, where they convert light into electrical charge – just as in organic solar cells. Nerve cells that adhere to the film (note: they are first pipetted onto the film and and grow there) react to this charge and in turn fire electrical impulses with which they stimulate other nerve cells.

The researchers have now been able to demonstrate this process for the first time in cell biological experiments. Cultivated nerve cells that were grown directly on the film were stimulated by several light flashes each lasting a few milliseconds at a wavelength of 660 nanometres (red light) and reacted as hoped. They generated so-called action potentials, which are essential for communication between nerve cells. The researchers have published the results of their electrophysiological measurements and computer simulations in the scientific journal Advanced Materials Technologies.

Corresponding author Theresa Rienmüller from the Institute of Health Care Engineering at TU Graz speaks of a paradigm shift: “In contrast to the current usual electrostimulation via metal electrodes, our pigment films represent a completely new way of stimulating nerve cells.” The films are so thin that they can be implanted easily. During the treatment, the nerve cells are then irradiated with red light, which can penetrate deep into the body without causing damage. “We think that short-term treatments can lead to long-term therapeutic effects. These experiments are currently being researched,” says Rainer Schindl, electrophysiologist at the Division of Biophysics at Med Uni Graz and supervisor in the project.
In the future, there would therefore no longer be a need for complex wiring, which in turn reduces the risk of infection after invasive procedures, because no more tubes or cables would have to lead out of the body to the outside. Thanks to their organic nature, the pigment films are extremely well tolerated by both human and animal cells.

The researchers see possible applications in severe brain injuries. Here, the stimulation of nerve cells can accelerate the healing process and prevent complications by “preventing the nerve cells from dying off”, says first author Tony Schmidt from the Division of Biophysics at Med Uni Graz. The researchers also see potential in other neurological injuries or in pain therapy. In addition, the technology could be used to create new types of retinal implants.

ore research is needed before the pigment film finds its way into clinical use. This is being done within the framework of an ongoing young independent researcher group funded by the Austrian Science Fund (title: LOGOS-TBI: Light-controlled OrGanic semicOnductor implantS for improved regeneration after Traumatic Brain Injury). Rienmüller, Schindl and Schmidt are confident that “the first pigment films will be able to be implanted in the next two years.”

This research area is anchored in the Field of Expertise “Human & Biotechnology“, one of the five strategic research areas of TU Graz.