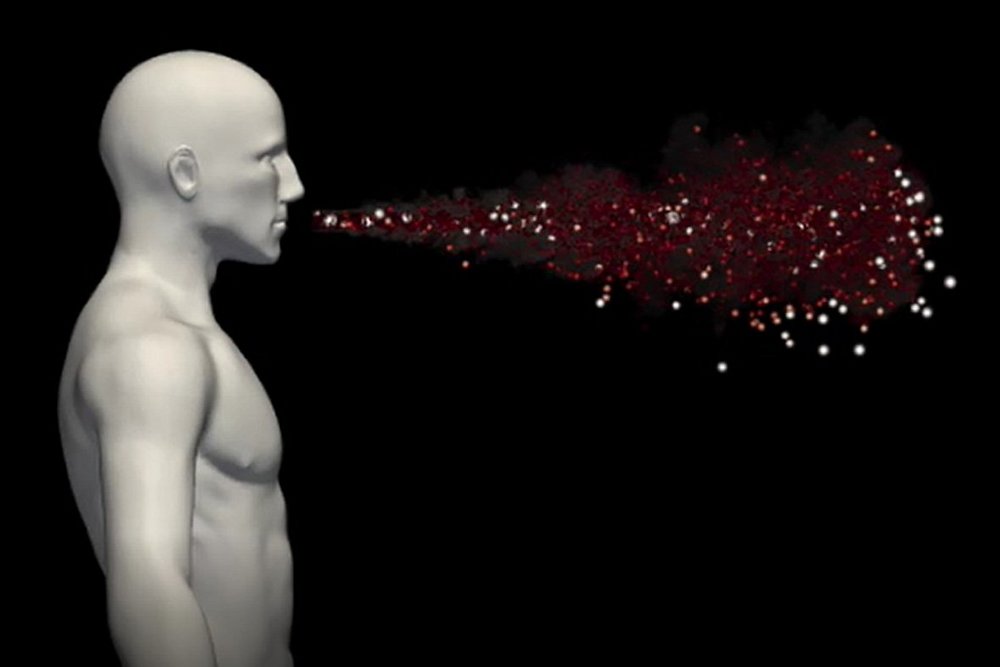 Computer simulations show, how long small droplets can remain suspended in the air

It is easier to get infected in winter than in summer - this is true for the Corona pandemic, for influenza and for other viral diseases. Relative humidity plays an important role in this. Outdoors, it is much higher outside in winter than in summer, as can be seen from the fact that our breath condenses into droplets in the cold air.

Previous models assumed that only large droplets pose a relevant risk of infection because small droplets evaporate quickly. At TU Wien (Vienna), however, in cooperation with the University of Padova, it has now been shown that this is not true: Due to the high humidity of the air we breathe, even small droplets can remain in the air much longer than previously assumed. The study was published in the scientific journal PNAS.

Prof. Alfredo Soldati and his team at the Institute of Fluid Mechanics and Heat Transfer TU Wien are researching flows that are composed of different components - so called "multiphase flows". This includes the air that an infected person exhales when sneezing: the infectious viruses are in liquid droplets of different sizes, with gas in between.

This mixture leads to a relatively complicated flow behaviour: Both droplets and gas move, both components influence each other, and the droplets can evaporate and become gas themselves. To get to the bottom of these effects, computer simulations were developed, in which the dispersion of droplets and breathing air can be calculated at different environmental parameters, for example at different temperatures and humidity.

In addition, experiments were conducted A nozzle with an electromagnetically controlled valve was installed in a plastic head to spray a mixture of droplets and gas in a precisely defined manner. The process was recorded with high-speed cameras, so it was possible to measure exactly which droplets remained in the air and for how long. Francesco Picano's team at the University of Padua was also involved in the research project.

"We found that small droplets stay in the air an order of magnitude longer than previously thought," says Alfredo Soldati. "There's a simple reason for this: the evaporation rate of droplets is not determined by the average relative humidity of the environment, but by the local humidity directly at the droplet's location." The exhaled air is much more humid than the ambient air, and this exhaled humidity causes small droplets to evaporate more slowly. When the first droplets evaporate, this locally leads to higher humidity, further slowing down the further evaporation process of other droplets.

"This does mean that small droplets are infectious for longer than assumed, but that should not be a reason for pessimism," says Alfredo Soldati. "It just shows us that you have to study such phenomena in the correct way to understand them. Only then can we make scientifically sound recommendations, for example regarding masks and safety distances."