The researcher receives the science prize worth up to 1.2 million euros for her work on a new measurement technology that enables UV-light-induced chemical processes to be investigated with unprecedented detail. 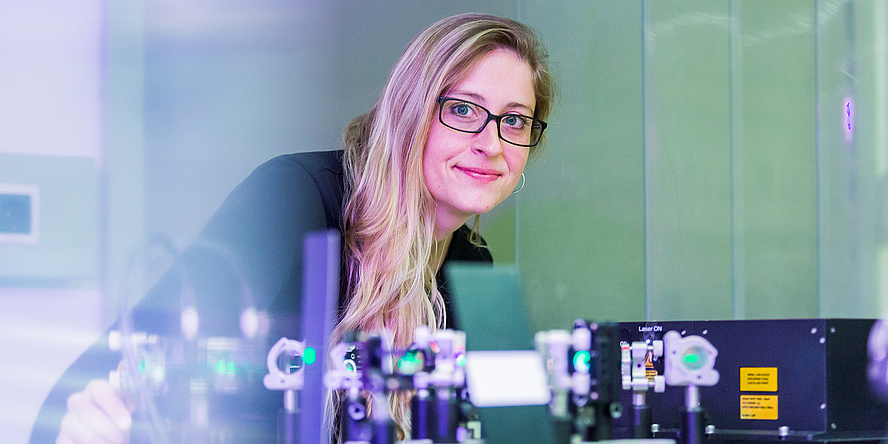 Electronic fingerprint spectroscopy (ELFIS), is the name of the new measuring method that Birgitta Schultze-Bernhardt now wants to develop further in the framework of the START programme of the Austrian Science Fund (FWF). The aim is to study light-induced chemical reactions, for example those triggered by the ultraviolet light of the sun in atmospheric trace gases. Understanding photochemical processes in the atmosphere can be the basis for successful measures against climate change.

The core of ELFIS is the combination of two so-called frequency combs. An optical frequency comb is created when a laser (usually working in the infrared range) emits ultrashort laser pulses with simultaneously different optical frequencies, i.e. different colours, at constant intervals. Optically, this image resembles a comb; – each tooth stands for an optical frequency. Hence the name "frequency comb". This tool was invented by Theodor Hänsch, who was awarded the Nobel Prize in Physics for it in 2005. Hänsch was Birgitta Schultze-Bernhardt's doctoral supervisor and long-time companion at the Max Planck Institute of Quantum Optics, where Schultze-Bernhardt worked intensively on frequency comb spectroscopy from 2006 to 2012. In this spectroscopic method, the frequency combs are sent through a material sample, and the molecules inside the material absorb the frequency combs to varying degrees. The result is a kind of fingerprint that provides information about the chemical components of the sample and its optical properties. Dual-comb spectroscopy is currently growing into one of the most popular laser measurement techniques because it can be used to measure the vibrations and rotations of molecules in the infrared spectral range.

ELFIS should make such observations possible in the UV range in the future, since the frequencies in this spectrum excite not only molecular vibrations but also electrons. "And electrons are crucial for every chemical bond," explains Schultze-Bernhardt. However, such investigations would require a laser that emits directly in the UV range, which is not yet available. "We therefore use non-linear processes to shift the light from a particularly powerful laser source into this high-energy range and generate two UV frequency combs. In other words, we convert infrared light into ultraviolet light," says Schultze-Bernhardt. Initial attempts to do so have already been successful.

Step by step to the goal

The top researcher, who has been conducting research at the Institute of Experimental Physics and the Institute of Materials Physics at Graz University of Technology since May 2019 and previously headed the junior research group "Ultraviolet Dual Comb Spectroscopy" at the Institute of Applied Physics at Friedrich Schiller University Jena, now wants to "conquer" the UV range step by step with the help of the START Prize.
In a first phase, a spectrometer is currently being developed that operates in the visible (green) spectral range and can detect trace gases such as nitrogen dioxide. Finally, a spectrometer in the near UV spectral range could be realistic within a year. At the end of the phased plan, Schultze-Bernhardt hopes to have a spectrometer "with which we will be able to view light-induced processes in a broad spectral range, in real time with high spectral and temporal resolution at the same time."

This research area is anchored in the Field of Expertise "Advanced Materials Science", one of the Five Fields of Expertise at Graz University of Technology.

Birgitta Schultze-Bernhardt (born 1981 in Erlangen, Germany) is a researcher at the Institute of Experimental Physics and the Institute of Materials Physics at TU Graz. She is part of the three-year Leading Women Programme at Graz University of Technology – a career initiative that prepares women assistant professors at TU Graz for future leading positions in university management. Schultze-Bernhardt is intensively engaged in laser technologies for the measurement of light-induced processes and received her doctorate at the Faculty of Physics of the Ludwig Maximilian University of Munich and at the Max Planck Institute for Quantum Optics in Garching under Nobel Prize winner Theodor W. Hänsch.

There is an interview with START Prize winner Birgitta Schultze-Bernhardt in scilog - the magazine of the Austrian Science Fund FWF (in German).

START Prize
The START Prize is one of the most lucrative and recognized scientific prizes in Austria and is awarded once a year by the Austrian Science Fund (FWF). The prize is endowed with 800,000 to 1.2 million euros and is intended to give young top researchers the opportunity to plan their research with a high degree of financial security over the next six years. This year, four out of seven START prizes went to the TU Austria universities TU Vienna (two awards), TU Graz and the University of Leoben.