One billion euros by 2024 and another billion by 2030: These investments are needed to successfully implement the Austrian hydrogen strategy, to use existing potentials and not to lose ground in global competition. 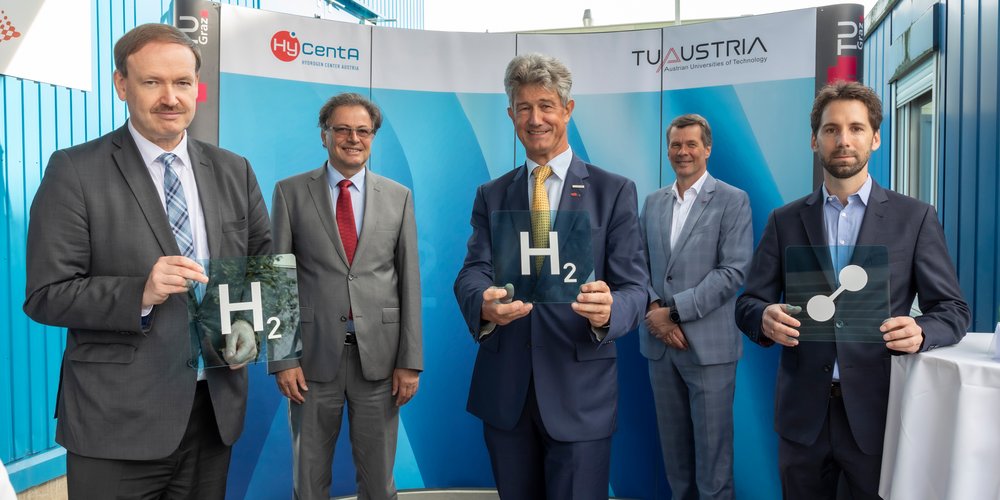 The Austrian Federal Government has anchored a national hydrogen strategy in its current government programme that is to make a significant contribution to achieving climate neutrality by 2040. The research and development of green hydrogen technologies is to be promoted especially for the production and transport sector, thus making Austria the number one hydrogen nation and positioning it as an international innovation leader.

While countries such as Germany have backed their ambitious and groundbreaking hydrogen programmes with the necessary financial resources, Austria is lagging behind in implementation.

"What is needed now is decisive action by political decision-makers and national solidarity with industry and research. This is the only way to ensure that Austria – unlike in the case of battery technology – does not lose touch with the global development of this key green technology," says the current president of TU Austria – the association of the three universities of technology in Austria, TU Vienna, TU Graz and the University of Leoben – in the person of TU Graz Rector Harald Kainz, urging a financial plan and giving concrete figures for the period up to 2024: "500 million euros are needed by industry for prompt process changes and for the development of production technologies that can ensure the necessary infrastructure. 400 million euros are needed for industry-related cooperative research to further develop and transfer the results to the market. 100 million euros should be allocated to basic research in this field in order to fully exploit the theoretical possibilities of this technology and also to ensure the co-financing of European funding." The same amount should then eventually be available until 2030.

There is no doubt that hydrogen technology is a key element in achieving the climate neutrality goal. Building on the pioneering work of Professor Karl Kordesch, who drove the first hydrogen-powered vehicles through Graz in the 1970s at Graz University of Technology, Austrian companies, research institutes and universities have been carrying out fundamental research and development work in this field for years. Groundbreaking hydrogen research with different focal points is being conducted at the three TU Austria universities in particular.

All the TU Austria universities are showing how much know-how is available in the field of hydrogen technologies in Austria in various flagship projects.

For example, the TU Vienna is examining the technical feasibility of decentralised production of hydrogen from biomass using various scenarios. And together with OMV, a process has already been developed by which green hydrogen can be transported cost-effectively via natural gas pipelines.

At TU Graz and its research shareholdings, around 160 scientists are currently working on safe, climate-friendly hydrogen technologies. Since 2005, the HyCentA at TU Graz has been Austria's first and only research centre specialising purely in hydrogen. Its managing director and scientific director Alexander Trattner and his team, together with partners in the Austrian hydrogen landscape, have successfully completed more than 70 projects to date – including milestones such as "the first Austrian hydrogen filling station, the first Austrian road-legal hydrogen vehicle, the first power-to-gas system or Europe's most modern fuel cell test bench", says Trattner, citing a few examples. The modern research infrastructure with test rigs for electrolysis, fuel cell systems and high-pressure hydrogen up to 1000 bar is one of the reasons why TU Graz with HyCentA has become one of the largest research institutions of its kind in Europe. "In autumn 2020, the HyCentA test facility will be expanded by a further 600 square meters to further strengthen hydrogen research in Graz," says Trattner.

The TU Austria universities with their associated research centres thus act as innovation anchors for the implementation of the Austrian hydrogen strategy. Now the developments must be continued, accelerated and the results transferred to the market. Education and training in this field should also be pursued. "From existing research know-how to the dominant production technologies and the available natural resources: Austria offers all the prerequisites to push ahead with the energy revolution using green hydrogen. We must all seize this opportunity together now", agreed TU Vienna Rector Sabine Seidler, TU Graz Rector Harald Kainz and MUL Rector Wilfried Eichlseder in a joint statement.

The economic potential behind these projects is shown in a recent study by the Economica Institute of Economic Research: With the two billion euro investment in infrastructure and research proposed by the TU Austria universities, the above-average income level in Austria could be maintained. The infrastructure component would generate a domestic gross value added of EUR 630 million and the research and development component a gross value added of EUR 274 million. The total growth impulse would thus amount to 904 million euros. This corresponds to an employment volume of 13,766 employment years, which means that around 1,250 jobs would be permanently secured or created.

"A part of this public expenditure is refinanced by the resulting tax and duty revenue to the amount of 430 million euros," says the author of the study and head of the Economica Institute of Economic Research Christian Helmenstein, who also holds out the prospect that the indirect fiscal profitability "will increase over time if Austrian competence in hydrogen technologies can be further developed in such a way that the currently still very high import share of 52.7 percent in the infrastructure component can be reduced." As know-how providers and central research partners, Austria's universities of technology play a decisive role in this respect.

Notice: panel discussion at the European Forum Alpbach
Hydrogen technology is also the topic of this year's Technology Talks at the European Forum Alpbach. In the framework of the TU Austria break-out session “Hydrogen: A Key Technology for Renewable Energy Systems", international and national experts will discuss current developments, initiatives and strategies on Friday, 28th August from 11:30 am. Information and tickets under https://2020.alpbach.org/.

The hydrogen research centre HyCentA has created a factsheet on hydrogen. More details can be found on the HyCentA website.