Space Weather: Reliable Predictions Thanks to Research in Graz

The influence of solar events on satellite-based applications such as orbit determination, telecommunications or navigation is being investigated by two research projects with the participation of TU Graz. 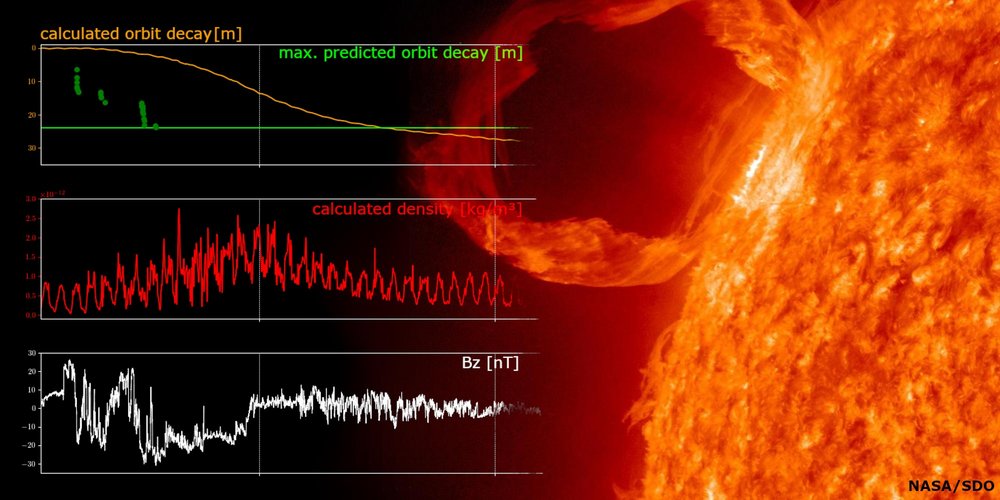 Solar storms and similar events can cause sustainable damages to electronic systems on Earth, as well as on satellites. The sun ejects huge clouds of charged plasma particles that massively disturb the Earth's magnetic field. "The ejected plasma consists mainly of electrons and protons and increases the neutral density in the Earth's atmosphere," explains Graz University of Technology (TU Graz) researcher Sandro Krauss from the Institute of Geodesy. Communication signals from satellites can be delayed and result in incorrect position determination. Furthermore, the charged plasma particles can heat up the upper layers of the Earth's atmosphere so that it expands, the atmospheric drag increases and satellites lose speed and altitude. In the worst case, this could lead to the loss of research satellites.
Krauss and his team are now working on two research projects to predict such space weather events in near-real time so that satellite operators and space agencies can respond to the associated hazards swiftly in the future.

In the SWEETS project, the research group, together with astrophysicists from the University of Graz, is pursuing a new combined approach to predict the effects of solar events on satellites. The basis for this is formed by atmospheric density estimates derived from orbital information and accelerometer measurements from various satellites, as Krauss specifies: "Depending on the atmospheric density, satellites can be accelerated or slowed down. From these accelerations due to drag, we can infer density." Because the satellites are at different altitudes (between 300 and 800 kilometres), the researchers can construct a tomography of the Earth's upper atmosphere and then estimate the impact of the solar event on the atmosphere as a function of satellite altitude. Combined with real-time measurements of the solar wind plasma and the Earth's magnetic field by satellites positioned 1.5 million kilometres from Earth, this should result in predictions with a lead time of 6-8 hours. "The satellites start taking measurements as soon as the solar wind hits them. The data is then transmitted directly to the ground stations," explains Krauss.

To extend the lead time, the project team links the acquired data to geomagnetic and physical values from several hundred solar events going back to the year 2000. The analysis is based on algorithmic calculations. The results will be published using a real-time demonstrator (SODA) and shall be incorporated into the ESA (European Space Agency) "Safety and Security" programme in the future.

In the ESPRIT project, on the other hand, the team of TU Graz together with the Space Research Institute of the ÖAW (Austrian Academy of Sciences) are investigating the physical states of the solar wind plasma and the interplanetary magnetic field as well as the actual solar radiation during different solar events. They receive support from colleagues at the University of Graz and the University of Colorado Boulder. "Especially in terms of accuracy and reliability, solar event prediction is still in its infancy," says Krauss, pointing out the need to acquire more knowledge about space weather. The chemical composition of the Earth's upper atmosphere is also being studied in more detail. It is known that certain compounds of nitric oxide (NO), carbon dioxide (CO2), and helium found there cool and thus minimize the heating of the Earth's atmosphere as a result of solar storms. An advantage for the Earth's atmosphere, but a disadvantage for science, because, according to Krauss: "We still know too little about the origin of these chemical states. This complicates predictive accuracy."
Krauss predicts that the results of both projects will lead to better and more accurate predictive models as early as within the next three years. Due to the rapid leaps in development, this is also necessary to reduce the risk of errors and failures for everyday devices and technical infrastructure.

This research is anchored in the Field of Expertise “Sustainable Systems”, one of five strategic foci of TU Graz.