How do lightning discharges and thunderstorms occur?

The Austrian Alpine region shows one of the highest lightning activities in Europe. Lukas Schwalt from the Institute of High Voltage Engineering and System Performance at Graz University of Technology answers questions about the origin of lightning discharges and thunderstorms, dangers and myths. 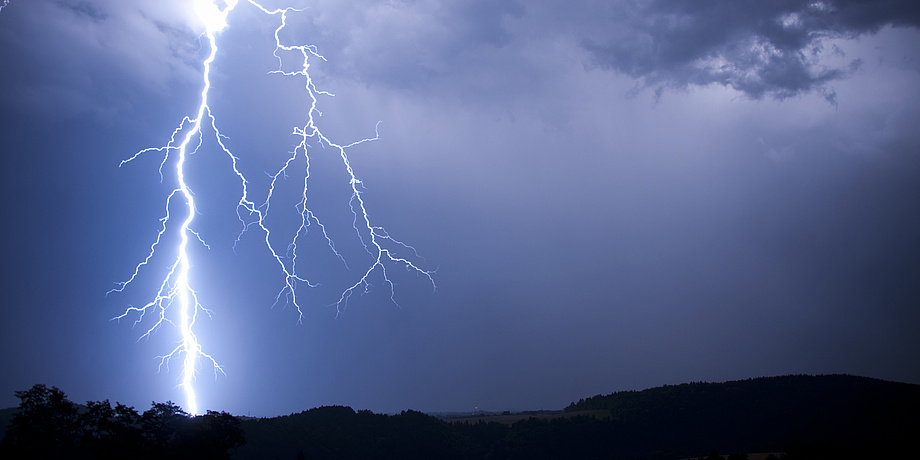 Cloud-Earth flashes, as shown here in the picture, were the focus of Lukas Schwalt's dissertation at the TU Graz. He recorded around 530 lightning strikes at 21 locations in the Austrian Alpine region. © Libor - AdobeStock

How are lightning discharges generated?

Lightning discharges occur in electrically charged thunderclouds as compensation for differently charged regions. The necessary process of charge separation during the formation or growth of a thundercloud has not yet been fully explained.

To equalise two differently charged regions in a thundercloud, between thunderclouds or between a thundercloud and the ground, an electrically conductive channel called "leader" is formed. This first-stroke leader develops stepwise  towards  a charge region of the opposite polarity (negative or positive) in the cloud, an object or directly to ground. In case a so-called “stepped-leader” starts growing and developing branches out to different degrees, a so-called upward "streamer" is emitted from objects on the ground. When this upward streamer connects with the downward leader, we generally speak of a “flash” or a lightning discharge.

At the moment of discharge, the leader heats up strongly, causing the air around it to expand. This process is then perceived as thunder.

Are there different types of lightning?

There are both cloud-to-cloud discharges and cloud-to-ground discharges. The former occur between clouds or within a cloud and have no contact with the ground. This type of lightning accounts for about 90 % of the total lightning discharges. The remaining 10 % occur as so-called cloud-to-ground flashes. Here, the lightning discharge either steps from the cloud towards the ground until it strikes a point on the ground (downward lightning, more frequent), or starts from exposed places on the ground, such as tall buildings or towers, in direction of the cloud (upward lightning, rare). Another distinguishing criterion is the polarity of the lightning discharge. Here, a distinction is made between negative (frequent) and positive flashes (rare), depending on the polarity of the discharged charge from the cloud.

How should I behave during a thunderstorm?

How do I know how far away a thunderstorm is?

If you can hear thunder, the thunderstorm is already less than 10 kilometres away from you. In this case you should immediately go to protected areas. You can calculate the distance of a lightning flash by counting the seconds between lightning and thunder and then multiplying this number by 340 m/s (approx. speed of sound in air). 30 seconds correspond to about 10 kilometres. If no thunder is heard for 30 minutes, it can be assumed that the thunderstorm is over.

What are the dangers?

There are many effects of lightning discharges. A direct lightning strike is the most dangerous for your body. Touching metallic parts that discharge a lightning current at this moment is life-threatening or can cause serious injury. There is also danger when staying near an object struck by lightning (tree, tower, etc.) as the discharged current can take a path over your body. In the vicinity of an impact site, the so-called step voltage (potential difference between the legs) can also cause injuries during the discharge of the lightning current.

Safe places during a thunderstorm are vehicles with all-metal bodywork and buildings with lightning protection systems, but also cable car cabins, cabins of construction machines and railway carriages. Here, too, it is important not to touch metal cables or to avoid contact. Peaks and ridge areas in the mountains are particularly unsafe. Persons in bodies of water are also at high risk.

Can lightning strikes be prevented?

How does a lightning protection system work?

Where does lightning discharges occur most often?

Worldwide, the Democratic Republic of Congo and the city of Darwin in northern Australia are considered to be the most active regions in terms of lightning activity. There is also a geographical peculiarity of a sea bay in Venezuela, the "Lake Maracaimbo". Venezuela's so-called "Catatumbo thunderstorms" occur on about 140 days a year and show a very high lightning frequency.

The following applies worldwide: If you decide to observe a thunderstorm, you should do so exclusively in a protected area - in a car or in buildings with lightning protection systems - and study the weather forecast and current radar images carefully and keep an eye on them.

Are there myths around lightning? Any widespread misunderstandings?

There is a phrase in German that says "Eichen sollst du weichen, Buchen sollst du suchen" (avoid oaks and seek out beech trees): this is a myth that persists. You should always avoid trees in a thunderstorm, no matter what kind.

Ball lightning is also a hotly discussed topic. To date, there is no scientific proof or physical evidence of this phenomenon. It is assumed that in some cases particularly positive cloud-to-ground discharges with a high return stroke peak current are perceived as such phenomena.

Doctoral thesis "Lightning Phenomena in the Alpine Region of Austria"

In his doctoral thesis "Lightning Phenomena in the Alpine Region of Austria", which was completed in 2019, Lukas Schwalt dealt with the investigation of cloud-to-ground flashes in the Austrian Alpine region and the associated evaluation of recorded data. For this purpose, real processes of cloud-to-ground lightning discharges were recorded in situ at 21 locations in Austria in order to generate and analyse a so-called "ground truth" data set (approx. 530 real ground strikes) of lightning discharges. This knowledge is now being incorporated into current research projects in the field of lightning discharges and is in demand internationally.

An insight into the "Blitzjagd" by Lukas Schwalt is given in the article "Ein Tag mit...Lukas Schwalt" which was published in the magazine TU Graz people (German only).

The Planet Research article "On the tracks of the thunderstorm" contains more details about the research of lightning strikes and hailstorms.

The platform ScienceClip published a video about Lukas Schwalt's lightning research (German only).