A completely new cooling concept has been invented at TU Wien (Vienna): Computer simulations show how quantum fields could be used to break low-temperature records. 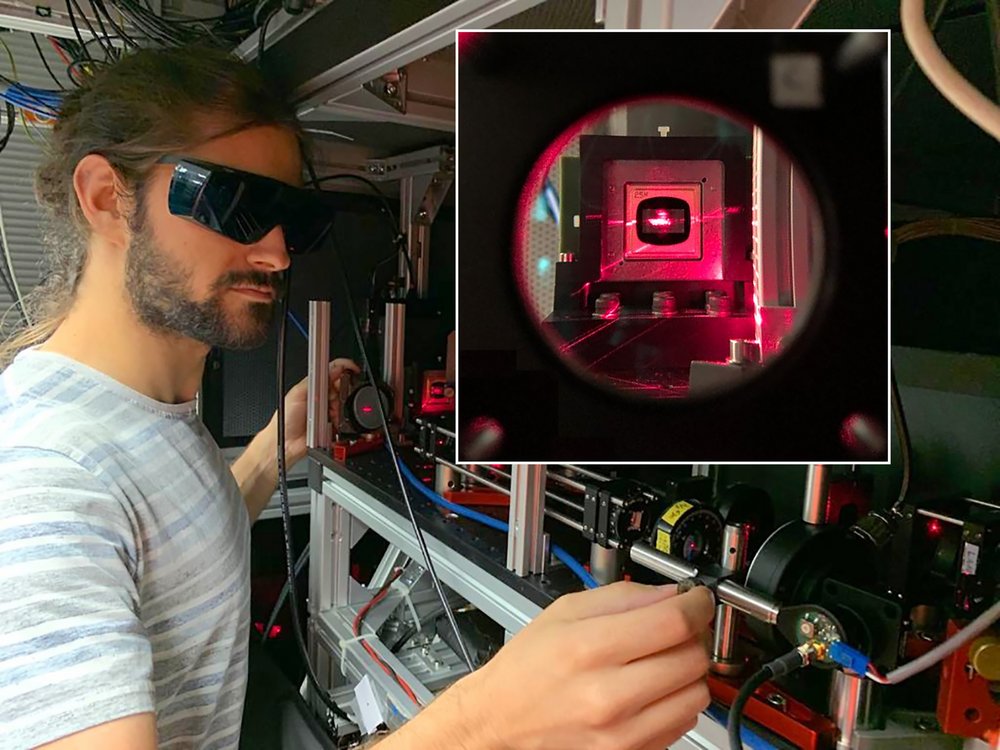 João Sabino in the lab, small picture: view through the laser system

At first glance, heat and cold do not have much to do with quantum physics. A single atom is neither hot nor cold. Temperature can traditionally only be defined for objects that consist of many particles. But at TU Wien, in collaboration with FU Berlin, Nanyang Technological University in Singapore and the University of Lisbon, it has now been possible to show what possibilities arise when thermodynamics and quantum physics are combined: One can specifically use quantum effects to cool a cloud of ultracold atoms even further.

No matter what sophisticated cooling methods have been used before - with this technique, which has now been presented in the scientific journal "Physical Review X-Quantum", it is possible to come a little closer to absolute zero. A lot of work is still needed before this new cooling concept can be turned into an actual quantum refrigerator, but initial experiments already show that the necessary steps are possible in principle.

"For a long time, thermodynamics has played an important role for classical mechanical machines - think of steam engines or combustion engines, for example. Today, quantum machines are being developed on a tiny scale. And there, thermodynamics has hardly played a role there so far" says Prof. Eisert from the Free University of Berlin.

"If you want to build a quantum heat machine, you have to fulfil two requirements that are fundamentally contradictory," says Prof. Marcus Huber from TU Wien. "It has to be a system that consists of many particles and in which you cannot control every detail exactly. Otherwise you cannot speak of heat. And at the same time, the system must be simple enough and sufficiently precisely controllable not to destroy quantum effects. Otherwise, you can't talk about a quantum machine."

"Back in 2018, we came up with the idea of transferring the basic principles of thermal machines to quantum systems by using quantum field descriptions of many-body quantum systems," says Prof. Jörg Schmiedmayer (TU Wien). Now the research team from TU Wien and FU Berlin examined in detail how such quantum heat machines can be designed. They were guided by the operating principle of an ordinary refrigerator: initially, everything has the same temperature - the interior of the refrigerator, the environment and the coolant. But when you evaporate the coolant inside the refrigerator, heat is extracted there. The heat is then released outside when the coolant is liquefied again. So by raising and lowering the pressure it is possible to cool the inside and transfer the heat to the environment.

The question was whether there could also be a quantum version of such a process. "Our idea was to use a Bose-Einstein condensate for this, an extremely cold state of matter," says Prof. Jörg Schmiedmayer. "In recent years, we have gained a lot of experience in controlling and manipulating such condensates very precisely with the help of electromagnetic fields and laser beams, investigating some of the fundamental phenomena at the borderline between quantum physics and thermodynamics. The logical next step was the quantum heat machine."

Energy redistribution at the atomic level

A Bose-Einstein condensate is divided into three parts, which initially have the same temperature. "If you couple these subsystems in exactly the right way and separate them from each other again, you can achieve that the part in the middle acts as a piston, so to speak, and allows heat energy to be transferred from one side to the other," explains Marcus Huber. "As a result, one of the three subsystems is cooled down."

Even at the beginning, the Bose-Einstein condensate is in a state of very low energy - but not quite in the lowest possible energy state. Some quanta of energy are still present and can change from one subsystem to another - these are known as "excitations of the quantum field".

"These excitations take on the role of the coolant in our case," says Marcus Huber. "However, there are fundamental differences between our system and a classical refrigerator: In a classical refrigerator, heat flow can only occur in one direction - from warm to cold. In a quantum system, it is more complicated; the energy can also change from one subsystem to another and then return again. So you have to control very precisely when which subsystems should be connected and when they should be decoupled."

So far, this quantum refrigerator is only a theoretical concept - but experiments have already shown that the necessary steps are feasible. "Now that we know that the idea basically works, we will try to implement it in the lab," says Joao Sabino (TU Wien). "We hope to succeed in the near future." That would be a spectacular step forward in cryogenic physics - because no matter what other methods you use to reach extremely low temperatures, you could always add the novel 'quantum refrigerator' at the end as a final additional cooling stage to make one part of the ultracold system even colder. "If it works with cold atoms, then our ideas can be implemented in many other quantum systems and lead to new quantum technology applications," says Jörg Schmiedmayer.