Milestone for the early detection of sepsis

Researchers from Graz, Austria, are developing a ground-breaking method that uses biomarkers to detect sepsis 2 to 3 days before the first clinical symptoms appear. This can significantly increase the chances of survival in cases of blood poisoning by bacteria or fungi. 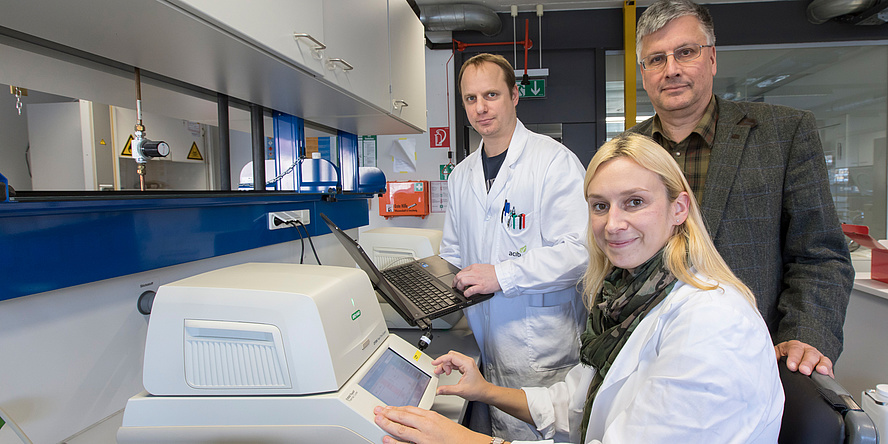 A team led by Christoph W. Sensen (right), head of the Institute of Computational Biotechnology at TU Graz, has succeeded in using biomarkers to diagnose sepsis 2 to 3 days before the first clinical symptoms appear. © Lunghammer - TU Graz (photo was made in 2017)

Whether activating or silencing genes, breaking down defective cells or building new tissue, our body is constantly working to repair itself, even in cases of illness. To fight a disease, our body sends out signals, often long before we ourselves notice the disease. Such signals are, for example, DNA molecules that are released from the body's own cells, circulate in the blood and are most likely recognised by other cells as a message to stimulate a defence reaction.

Researchers at TU Graz’s Institute of Computational Biotechnology have identified messengers and together with scientists from the Austrian Centre of Industrial Biotechnology (acib), the Medical University of Graz and CNA Diagnostics GmbH (Grambach, Styria), have developed a ground-breaking method: using these endogenous signals (biomarkers), sepsis can be diagnosed with high accuracy two to three days before the first clinical symptoms occur. The test based on this method could significantly increase the chance of survival of sepsis patients and lower the negative side effects for sepsis survivors. The researchers have now published details on this in the two papers "Evaluation of host-based molecular markers for the early detection of human sepsis" and "Circulating cell-free DNA is predominantly composed of retrotransposable elements and non-telomeric satellite DNA" in Journal of Biotechnology (Elsevier).

Classification algorithms serve as a basis

"Our team has identified 24 biomarkers with which bacterial- or fungal-induced sepsis can be detected at an earlier stage when compared to the currently used tests, using classification newly developed algorithms," explains Christoph W. Sensen, head of the Institute of Computational Biotechnology at TU Graz.

For their work, the bioinformaticians used sequencing data derived from anonymised plasma samples provided by the research groups led by Robert Krause, co-director of BioTechMed-Graz, and Peter Neumeister at the Medical University of Graz. The samples came from persons diagnosed with sepsis caused by bacteria or fungi, respectively, (in whose blood these pathogens were detected), influenza (a disease with symptoms partly similar to sepsis) or lymphoma, as well as from healthy individuals. The sequencing data formed the basis for the development of the algorithms that were used to identify the markers, thus creating an unprecedented set of markers. "This data set can be used to distinguish people in the early stages of sepsis and those with early clinical signs from healthy people and from people with other diseases." Sensen continues: "Within the patient group for which the markers were developed, the diagnostic accuracy was almost 90 percent in the period from two days before the first clinical signs until two days after diagnosis with the currently used diagnostic methods. In blind studies with patient groups that were not included in the marker development, the accuracy was still up to 81 percent." With the help of this method, sepsis can therefore be diagnosed much earlier than with any other diagnostic method.

In the course of their studies, the researchers also developed a new form of quantitative real-time PCR test. PCR stands for Polymerase Chain Reaction, a method for amplifying nucleic acids. PCR-based tests are already in use in clinics, for example for the detection of the covid-19 virus in patients. These kind of tests are often used to amplify the DNA or RNA of an infectious agent in a blood, plasma or serum sample, e.g. allowing the direct detection of bacteria or fungi in sepsis patients. In view of the large number of possible pathogen species which might case sepsis however, this is only possible to a very limited extent for sepsis patients and is therefore very imprecise. The newly developed test of the Graz group, on the other hand, focuses on the body's own signals, which are representative for the onset of sepsis for all bacterial and fungal cases. These can therefore be measured with much higher accuracy and also 2-3 days earlier than the direct detection of pathogens would allow.

Approval in the United States at the U.S. Food and Drug Administration (FDA) in Washington has already been applied for via the 510k approval process and the clinical trial has begun. The work for approval in Europe is just starting. Christoph W. Sensen hopes that the tests will soon be used on a large scale. "However, the corona pandemic is putting our timetable somewhat on the back burner, as US hospitals will of course not be able to supply plasma samples for some time due to the current situation."

Bernd Nidetzky, CSO of the Austrian Centre of Industrial Biotechnology (acib), comments: "The development of fast and efficient diagnostic procedures, such as the method for early detection of sepsis presented here, is a new field within acib, which we are establishing in the current funding phase of our competence center. We are delighted that this work has reached the clinical trial phase so quickly!"

In the meantime, data from China shows that even covid-19 patients with severe end-stage disease often had sepsis as a secondary disease. Sensen and his team are all the more interested in cooperating with biobanks such as BBMRI-ERIC and hospitals that are able to provide the team in Graz with plasma samples from Covid-19 patients. Because, according to Sensen: “On the basis of the sepsis early-detection research programme, we should be able to develop diagnostic tools for the faster identification of high-risk patients and a strategy for early intervention at the first signs of sepsis, which can be used in future pandemics to reduce the consequences of the infection for those affected."

This research project is anchored in the Fields of Expertise Human & Biotechnology and Information, Communication & Computing, two of the five strategic foci of Graz University of Technology. The participating researchers are part of BioTechMed-Graz – the research cooperation between Med Uni Graz, TU Graz and Graz University of Technology in the field of life sciences.